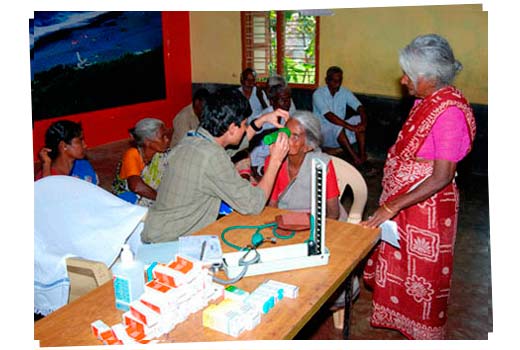 As part of its Corporate Social Responsibility initiatives, Michelin Tyres joined hands with Sankara Nethralaya to conduct three eye screening camps in Tiruvallur district. A total of 599 people underwent a basic vision screening at the camps held at Sengarai village (September 18), Karadiputhur village (November 13) and Karadiputhur village (December 12). One hundred and two people were identified with vision-related problems. Forty-six people were taken to the base hospital for further ophthalmic evaluation, 23 underwent surgery and 128 were provided with spectacles. The costs for the surgery and spectacles were borne by Michelin Tyres.

Mr. V. Sivakumar, Administrator, Jaslok Community Ophthalmic Centre lauded Michelin’s efforts in successfully conducting the eye camps. “Efforts such as these from corporate bodies will go a long way in ensuring that health care services reach out to all sections of society,” he said.

‘Natya Drishti’, a well-choreographed Bharatnatyam performance by students from the Ellora Centre for Performing Arts, was presented in Dallas-Forth Worth, Texas, US, on October 24, 2010, in aid of Sankara Nethralaya.

The theme — “Vision-A Gift from God”— was in conjunction with Sankara Nethralaya’s mission for vision and was presented by twenty-five children from the Ellora Centre under the able guidance and choreography of their guru Smt. Vani Ishwara. The troupe presented dances depicting the grace of Lord Shiva and the lives of his devotees including Kannappa Nayanar.

The audience of about 350 people was left enthralled by the outstanding performance by the artists. Sankara Nethralaya’s founder and Chairman Emeritus Dr. SS Badrinath and his wife Dr. Vasanthi Badrinath also participated at the fund-raiser.

Dr. Badrinath spoke passionately on the current and future growth, research and philanthropic activities of Sankara Nethralaya in the field of eye care in India. He, along with Dr. Vasanthi, expressed their gratitude and encouraged the audience to donate towards the cause of Sankara Nethralaya. Their presence and interaction with the artists, guests and volunteers was a great source of inspiration and encouragement.

Sankara Nethralaya OM (SN OM) Trust has been approved as a Combined Federal Campaign (CFC) participant in 2011 by the US Office of Personnel Management (OPM). SN OM Trust has been participating in CFC for the past several years.

CFC is a drive by the US Office of Personnel Management encouraging US federal employees to donate to various non profit charities pre-screened by them. Every year a booklet is published of the pre-selected charities whom federal employees are encouraged to donate as a one-time contribution or through payroll deduction. Employees can start or make changes in contribution only during the 'open season', which for 2011 is open now through December 13, 2010.

The CFC number for Sankara Nethralaya OM Trust is 68803. 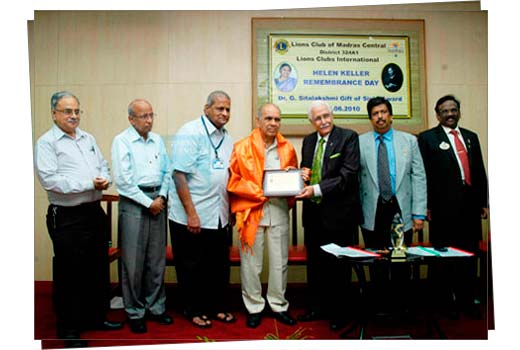 The annual Helen Keller Remembrance Day awards saw doctors, hospitals and social service organisations being honoured for their contributions in the field of ophthalmology. The event was held at Sankara Nethralaya on June 3,2010.

This year’s ‘Dr. G Sitalakshmi Gift of Sight Award’ was presented to Dr. Leila Mohan, Comtrust Eye Hospital, Calicut. The award is given to a corneal surgeon who is rendering selfless service in the field of cornea grafting.

There were six recipients to The ‘Knight of Blind Award’ including doctors, paramedical staff and social workers.

Chief Guest Lion Dr. Ashok Mehta said the awards would serve as a great source of encouragement for awardees to continue with their outstanding work in healthcare.

Remembering Helen Keller as a role model, Chairman Emeritus, Dr. SS Badrinath urged doctors and students to imbibe qualities of patience and perseverance — traits which helped Helen Keller and her teacher Anne Sullivan overcome all adversities. The dignitaries lauded the services of Lion Hari Narayanan in oraganising the function. 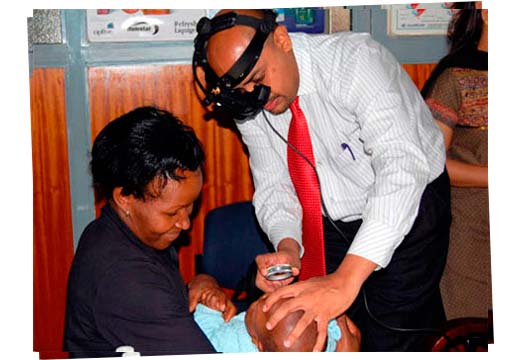 As part of a joint collaboration between the Rotary Club of Chennai Galaxy, Lions Club, and Sankara Nethralaya, a team of super specialized doctors from Sankara Nethralaya conducted an eye camp at Nairobi, Kenya from May 20 - May 27, 2010.

For the entire team, the opportunity to make a difference in the lives of so many was a truly rewarding experience.

The first of the benefit concerts commenced at the CET auditorium, San Jose, California on May 16. Mr. Unnikrishnan, along with Mr. Embar Kannan (Violin) and Mr. Arjun Kumar (Mrudhangam), mesmerized the audience with a soulful performance interspersed with ragas and bhajans.

The three-and-a-half-hour performance also included individual performances by Sri. Embar Kannan and Sri. Arjun Kumar, much to the delight of the audience. The support from the media (sulekha.com, sivajiTv.com, India Currents, Psymphony Radio) as well as organisations like SIFA (South Indian Fine Arts, Bay Area) and INDUZ in promoting the concert was deeply appreciated by one and all.

Earlier on, Mr. Alagiri, Manager, Resource mobilization, Sankara Nethralaya spoke eloquently about the many achievements,initiatives and activities of the SN OM Trust.

After an outstanding performance at San Jose, Mr. Unnikrishnan and his team next headed to Washington DC where they enthralled audiences at the Sri Siva Vishnu Temple. The audience went into raptures on the exceptional display of talent. Mr. Unnikrishnan, Mr. Embar Kannan and Mr. Arjun Kumar accommodated spontaneous requests from the audience.

SN OM Trust also held a screening of 'Future Vision' – a documentary capturing the phenomenal growth of Sankara Nethralaya and showcasing its initiatives and future projects.

The last leg of the concert took the artists to the Hindu Temple, Atlanta, where they performed to a packed audience. The artists were at their musical best as they captivated the audience with some of their most popular renditions. 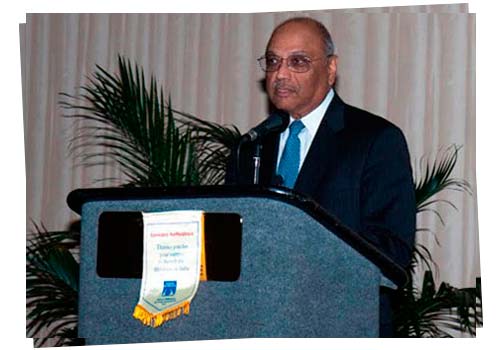 Coimbatore Krishnarao Prahalad, one of the world’s most influential management thinkers and Distinguished Professor at the Ross School of Business, University of Michigan, passed away on April 16, 2010 in San Diego, US, after a brief illness.

French Mathematician and Philosopher Blaise Pascal had once said, “Man's greatness lies in his power of thought.” And it is this power of thought, which made Prof CK Prahalad stand out from the rest. Whether as a corporate consultant, author or management guru, Prof. Prahalad played a vital role in shaping the growth of numerous companies. He was known to adhere to good corporate governance and ethical standards.

In his untimely death, Sankara Nethralaya has lost a truly remarkable supporter of Nethralaya’s mission for vision.

The lecture, which was attended by senior corporate executives and management professors, helped raise about $ 18000 through which around 278 cataract surgeries were performed, free-of-cost, on indigent patients.

Apart from being the leading cause of preventable blindness, Cataract also adversely affects the livelihood of many — especially the economically weaker sections in society — who are forced to quit their jobs due to poor vision. Prof. Prahalad’s selfless deed has removed the cloud of uncertainty from the lives of many and replaced it with a ray of hope. They say that deeds, not stones, are the true monuments of the great. For the Nethralaya family, the deeds of Prof. Prahalad will forever be etched in the minds and hearts of all at Sankara Nethralaya.
Obituary – GDIACC newsletter

The Road to Success 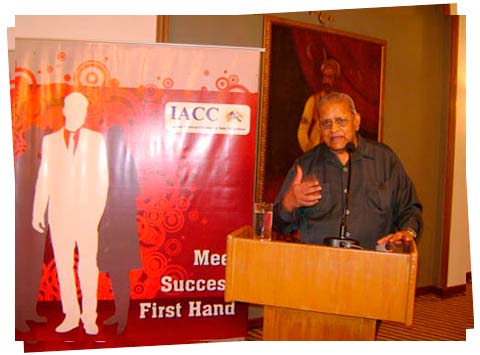 Organised by the Indo-American Chamber of Commerce (IACC) on April 29, 2010, Dr. Badrinath shared with the gathering the genesis of Sankara Nethralaya, the institute’s growth and achievements.

While elaborating on the various steps taken by the institute to achieve excellence in all fields, including medical, academics and research, Dr. Badrinath said the underlying goal was to ensure that Sankara Nethralaya served as a role model for healthcare delivery in India. 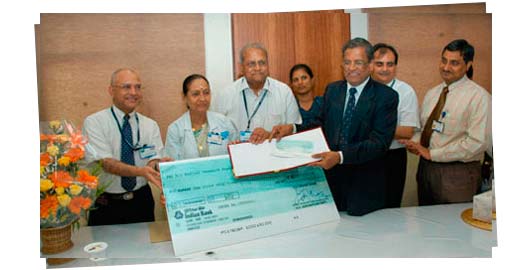 As part of its Corporate Social Responsibility Initiative, Indian Bank — a leading nationalized bank — has come forward with a munificent donation of Rs. 1 crore towards Sankara Nethralaya.

Indian Bank (Chennai) Chairman and Managing Director Mr. M.S. Sundara Rajan, who presented the cheque to Chairman Emeritus Dr. SS Badrinath on March 15, 2010, lauded the “customer- centric attitude” adopted by the institution as well as the “mind-boggling number of cases the institute’s dedicated team of doctors attend to.”

Appreciating the Indian Bank’s magnanimous gesture, Dr. S.S.Badrinath, said “it means a lot to us, as every rupee is channeled towards the well being of the needy. We are grateful to all our donors who propel our mission of serving the poor and reaching out to people who do not have access to medical facilities.”

The donation will be directed towards supporting the services of the second floor of the main consultation block (MAHYCO) located at Sankara Nethralaya’s main campus. The second floor houses the Glaucoma, Neuro-ophthalmology and Glaucoma diagnostic services. Every day about 200 people are seen on this floor.

A plaque was unveiled by Mr. Sundara Rajan on the occasion. 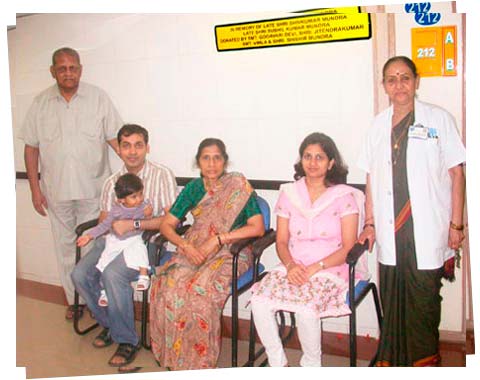 Coming from the little-known city of Seohara in Uttar Pradesh’s Bijnor district, Vimla Mundra brought to Chennai not only her embroidery skills but also her compassionate spirit.

Having been introduced to Sankara Nethralaya by a relative, Ms. Mundra’s initial association with the institute was restricted to spreading word about the hospital’s quality and affordable eye care services among friends and relatives. This small step would pave way for a bigger one in the early 1990s, when she joined SWAN — Sankara Nethralaya Women Auxiliary — as a volunteer. And there has been no looking back since then. Like any other SWAN volunteer, she has helped the institute in various capacities.

“Extremely satisfied” by the time spent at Nethralaya, the people she meets here and the opportunity to serve others, Ms. Mundra and her family recently donated Rs. 5 lakhs towards dedicating a room in the memory of her father-in-law Shri. Shiv Kumar Mundra, and her husband Shri. Sushil Kumar Mundra. This is not the first time the SWAN volunteer, and her family, is donating to Sankara Nethralaya. “The work Nethralaya undertakes is commendable and we consider ourselves fortunate that we are able to help in our small way.”

Nethralaya is deeply grateful for the thoughtful and benevolent gesture from the Mundra family. 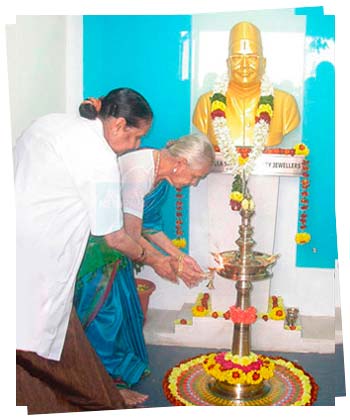 Smt. Sulochana Amma lighted the traditional lamp following which she and her family were shown around the refurbished clinical laboratory facility. A detailed document listing the activities and achievements of the clinical laboratory was presented to the Smt. Sulochana Amma and her family, who donated Rs. 1 lakh to SWAN (Sankara Nethralaya Women Auxiliary) on the occasion. 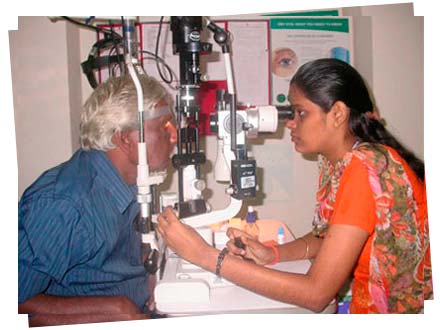 Owing to public demand, Navasuja Sankara Nethralaya conducted a screening and counselling for senior citizens (above 60 years) on December 27, 2009. Around 100 people were screened and counseled and 74 people were referred to undergo further medical examination.

All those who came were tested for distance & near vision. Apart from checking the eye pressure, a slit lamp examination was also conducted. People were made aware of their eye conditions and were given eye care tips.

Navasuja Sankara Nethralaya had earlier screened and counseled 137 persons on September 20, 2009. The screening and counselling was undertaken to commemorate World Elders’ Day (October 1).