When words failed, it was tears that spoke eloquently! 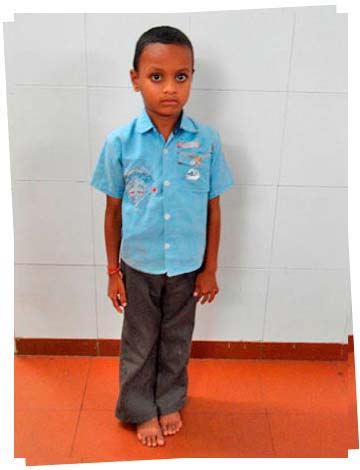 It had rained heavily all night but the depression in the bay had not apparently weakened and the rains were lashing out with unabated vigour much after sunrise, a city not cut out for heavy rains the roads in Chennai were predictably clogged making both vehicular and movement on foot most cumbersome and normal life was thrown totally out of gear.

The scene inside the Jaslok Community Ophthalmic Centre the community services wing of Sankara Nethralaya offering cost free treatment to indigent patients however painted a very different picture. The clock at the front office showed 8:00 am and inhospitable weather notwithstanding poor and needy patients had assembled in good number at the place which had over the years become a beacon of hope for the poorest of the poor among the visually impaired. The place was bustling with activity, hospital staff serving free breakfast for the waiting patients, front office executives busy registering new patients, attendants guiding first time patients on procedures and doctors and Para medial staff rushing about in right earnest.

Among the patients assembled at the waiting lounge was little Krishnamurthy a nervous little lad of about 7 years standing with his hand firmly clasping his father’s hand, he seemed to be in a state of shock and fear, unsure of his movements without help from his father. Father and son had traveled more than 200 kilometers from their native village near Thiruvannamalai unmindful of the hostile weather conditions to the Jaslok Community Ophthalmic Centre the place on which Anand the boy’s father had pinned his last hope of regaining his little son’s vision.

After a quick registration process the executive at the front office started with the preliminary questions on what the problem was, the father of the boy seemed to be under heavy emotional stress and could hardly bring the words to his mouth, between sobs and sighs he narrated that his son Krishnamurthy aged 7 years was struck very hard by a cricket bat on his left eye when playing a game of cricket near his home, the impact of the blow had caused major damage to the left eye and had robbed him of his sight instantly. The doctor at the local clinic after examining the effected eye had indicated that the damage seemed irreparable; he expressed his helplessness and referred the boy to the nearby government hospital for a second opinion. The doctors at the government hospital examined the effected eye, realizing the seriousness of the case and the poor financial state of the boy’s father they referred the patient to the Sankara Nethralaya for cost free advanced treatment.

The front office executive at JCOC took at a quick look at the letter from the government hospital; it described the case as Traumatic Cataract Left with doubtful Post Capsule. Realizing the gravity and urgency of the situation he got to act quickly, he understood that the diagnosis and treatment of the problem would involve several examinations, which would warrant the patient’s stay in the city for a couple of days. Given the terrible weather and the financial wherewithal of the patient there was no way they could have found accommodation in the city or be asked to shuttle between their village and Chennai. The front office attendant immediately made arrangements for the boy and his father to stay at the hospital until the treatment could be completed.

The boy was then thoroughly examined by a team of doctors, after several levels of in-depth evaluation the team concluded that it was a case of Pars Plenor Cataract requiring Anterior Viterectomy and implanting of Foldable intraocular lens under local anesthesia. This was followed by Lab and physician tests to ascertain the boy’s fitness for surgery after which surgery was successfully carried out by a senior surgeon and the patient was discharged the very next day with vision in his left eye fully restored. It was an emotionally and professionally fulfilling moment for the surgeons, doctors, paramedical and administrative staff who attended to little Anand from the day he walked in with the pain and trauma of loosing his vision in his left eye.

To Krishnamurthy the boy’s father it was a moment of ecstasy and joy beyond words, a fortnight’s anxious wait was over, his worst fears were belied and his son’s vision was restored fully, he was overwhelmed by a mixture of emotions and was at a total loss for words, his attempts to express his gratitude to the doctors and staff at JCOC failed as his voice was choked and the words seemed to be failing him once again, tears ran down his cheek so much like when he walked in a fortnight back, it was just that this time around they were tears of joy!

On October 8, 2011 Dallas Metroplex was treated to a multicultural event by a group of seventy-two children performing Light music, Indian classical music, folk dances to an audience of over four hundred.

After three months of rehearsals, on October 8th, 2011, Small Acts of Kindness took place. It was a multicultural program including the participation of several dance and music schools throughout the Metroplex. Sruthilaya, Pranavam Music School, Nruthya Sakthi Dance School, Divya Dhwani, and many other schools participated in the performance.

The program began promptly at 4:00 PM with a welcome note by Shri Santhanam Mullur and a piano piece composed and played by Shruthi Prabhu followed by her talk on the genesis of the program. It also included a rendition of “We are the World” by Michael Jackson and “Firework” by Katy Perry. Hindustani and Carnatic music, as well as several dance numbers, were performed. The audience was indeed impressed at the diversity of this unique event. The theme song for this event was “Ovvoru Pookkalume” from the movie Autograph. This song was auctioned (a unique concept introduced to Dallas) off to the audience and raised about $500 by itself. People responded with generous, donations, and sponsorship. All of the children performed with something that could only be described as determination, happiness, and humility. Towards the end, all the teachers of the school who participated and Shruthi Prabhu were given a Sankara Nethralaya plaque and all the children were given a certificate of participation. As a note of thanks and recognition for continued help to Sankara Nethralaya, Hema Mohan (Fun Asia), Ambreen Hasnat (Fun Asia) were given SN Plaques by Shabnam Modgil of Fun Asia. The event ended with Dr. Arvind Neelakantan thanking the patrons, audience and the volunteers.

Without a doubt, this was the program of the year, and we will look forward to similar performances in the near future.