Sankara Nethralaya's noble demonstration of the teachings of Swamy Raghavendra, that 'Life itself is a worship' and 'Universal affection and love to fellow beings' at the very land of his holy abode, wins the blessings and admiration of the Saint and the Pontiff of the 'Sri Raghavendra Matha' 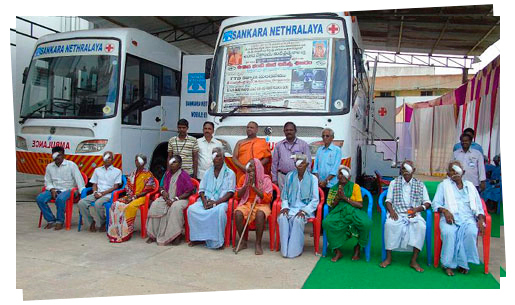 We take pleasure in sharing below the printed manifestation of the divine blessings from a most sacred shrine
Click Here...

As an institution committed to the disseminating of knowledge and skills for the common good, Sankara Nethralaya engages itself in a very interesting endeavour over and above its conventional teaching and training initiatives at its centres. The institution provides real time learning and exposure to overseas students at different levels in their academic career through its volunteering programs.

Sankara Nethralaya is a preferred destination for observership, internship and volunteering to Indian students pursuing various life science courses in the USA on account of the following factors

1. It is manned by a highly proactive and sympathetic medical and non-medical personnel who value the time and cost incurred by the student and impart the maximum knowledge and learning to them. Personnel who do not consider volunteering as a routine exercise but a critical part of the student’s learning curve.

2. A large number of out-patients and in-patients with a wide array of eye ailments being examined and treated under one roof provides a deep insight into diverse diagnostic and treatment modalities and acts as a great learning experience

3. The presence of a state of the art research facility, learning and training facility, clinical care and diagnostic laboratory under a single roof is a boon to the students who get a great exposure to all these facets during their training

4. Exposure to treating a large number of indigent patients both at the community hospital and at the outdoor camps not only gives the interns a peep into the world of community care but also inculcates a spirit of service with a personal touch, the hallmark of Sankara Nethralaya. A trait that every man /woman of medicine should possess in addition to their core competence levels.

5. Last but not the least the students can club their volunteering during their trip back home during vacation, which saves significant cost.

Concert by Classical Singer Yesudas in Support of SN Chennai 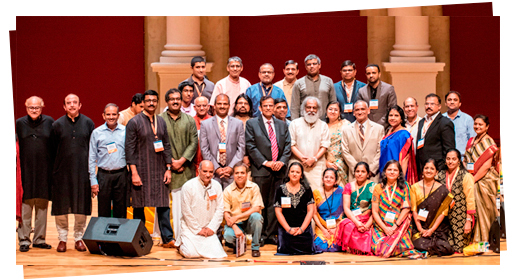 OM Trust-USA, the Maryland-based fund-raising arm of Sankara Nethralaya hospital in Chennai, India, organized a fund-raiser on Sunday, September 17, at Lassiter High School, in Marietta, Georgia. The event included a classical music concert by the renowned musician, Padma Vibushan K. J. Yesudas and the 1,000-seat capacity auditorium filled up hours before the start of the program.

After a welcome speech by Bala Indurti, S. V. Acharya, Treasurer of OM Trust, USA spoke about the objectives of the OM Trust and how it had been instrumental in supporting the charitable work of Sankara Nethralaya. He was followed by the event that the audience was eagerly waiting for, the concert by Yesudas and an introduction of the artists.

Yesudas, who is 77, began the concert with a Navaragamalika varnam. After requests from the audience, Yesudas sang many of the kritis that he has popularized over the years. Before singing the very well-known Vathapi Ganapathim in Hamsadwani, invoking Lord Ganesha, Yesudas jokingly remarked that Vathapi is not the only song on Ganesha that he knows and that he would be happy to sing another composition on Lord Ganesha. The audience, however, insisted that he sing Vathapi and he obliged. Yesudas was accompanied by Srikanth on the violin, T. S. Nandakumar on the Mridangam, Santosh Chandru on the Ghatam, and Varshney on the Thampura.

After the concert, Dr. Ram Sriram, President of the Carnatic Music Association, said that it “was a scintillating two and a half hours of music.” Sriram related how each composition that Yesudas sang during the concert inspired an emotional and spiritual feeling in the minds of the listeners. He remarked that “only when an artist feels the emotions in his own heart, can he, in turn, inspire such feelings in the hearts of the audience.”

Sriram said that Yesudas was travelling in the “Sapthaswara Chari” – the universe of melody that seven notes create and that he was taking the audience with him in that journey.

The audience was overwhelmed by emotions when Dr. Ravi Sarma spoke about his mother and how, during her later years of her life, she suffered significant loss of eyesight. He announced that a major donation to OM Trust for a sum of $160,000 would be made by his family foundation named in honor of his mother, Pudipeddi Ramalakshmi. On behalf of Dr. Ravi Sarma’s family, Yesudas handed the check to S.V. Acharya, President of OM Trust.

The credit for putting together this event goes significantly to Dr. Seshu Sarma whose dedication and leadership brought together prominent community leaders and organizations and a group of dedicated volunteers to help make the event a great success. Sarma, Moorthy Rekapalli, Bala Indurti, Krishnadas Pisharodi, Uma Narayan, Srikripa Eashwaran, Rajeev Menon, Antony Thaliath, Ashok Kumar, Raj Rengarajan and Raghava Thadavarthi worked tirelessly for months to make this event a reality. The event raised $150,000 which that will be used to restore vision for thousands of indigent patients served by the Sankara Nethralaya Hospital.

Sankara Nethralaya is a charitable non-profit hospital in Chennai, India started in 1978 by the renowned ophthalmologist, Dr. S.S. Badrinath to offer high-quality eye care to the rich and the poor. In rural areas there is both lack of awareness of preventive eye care and availability of qualitied doctors. SN has a program to take eye care to where the poor patients live through thousands of eye-camps in villages around Tamil Nadu, Andhra Pradesh, Madhya Pradesh, and Maharashtra. The poor are not charged any fees for the pre-operative or post-operative care. To defray the costs of these treatments SN depends on donations from philanthropic individuals and organizations and SN OM Trust helps to raise funds in the US.

The Dallas Chapter of the Sankara Nethralaya Ophthalmic Mission Trust (SN OM Trust) joined hands for the 2nd time with the ‘Indian Fine Arts Academy’ (IFAA) the well-known champion of Indian music and culture in the DFW area to organize a Grand Musical Ensemble titled “ Wind Whispers from India” featuring Mr Rajhesh Vaidhya on Saraswati Veena, Mr Ronu Majumdar on Bansuri, Mr Vinod Venkatraman (Artistic Director of the Event) on Mridangam, Mr Srinivasan on Morsing, Mr Harshad Kanetkar on Tabla and SN OM Trustee Mr Sowmya Narayanan on the Ghatam , at the Unity Church of Dallas, Texas on the 9th of September 2016.

While the photo exhibition booth set up by the SN OM Trust volunteers from the DFW Metroplex helped to showcase the activities of the SN OM Trust in the USA and Sankara Nethralaya’s cost free services to the poor in India, the sale of MS Subbulakshmi music CDs, SN OM Trust T-shirts at the stall helped to raise funds for the same cause. Mr Vinod Venkataraman provided a grand introduction of the esteemed artists to the DFW community and mentioned about the artists warm support to the activities performed by Sankara Nethralaya and the SN OM Trust, USA Dallas Chapter in raising funds through this event towards supporting free surgeries.

Delivering the Vote of Thanks Dr Arvind Neelakanthan an alumni of Sankara Nethralaya presently with the Glaucoma Center of Texas gave a passionate account of his Alma Mater's contribution towards eliminating blindness through its research, knowledge dissemination and cost free community eye care services and its yeoman service to society. Dr Arvind Neelakanthan made a fervent appeal to the audience to donate generously towards supporting the large number of cost free surgeries to indigent patients in India that Sankara Nethralaya plans to perform from the proceeds of this event. He closed his talk with a warm note of thanks to the artists, the Board of Trustees of the IFAA and their volunteers for their kind and warm support extended in organizing the program.

USA’s well known farming equipment and technology conglomerate sows the seeds to relief and joy of the visually impaired in India!

Allis-Gleanor Corporation (AGCO) the Duluth, Georgia, USA based Tractors and Farm equipments manufacturer is among the world’s most well known and largest organizations in its field of activity, with some of the premium brands in its stable. The company is also the overseas collaborator of Tractors and Farm Equipments (TAFE), India’s highly respected and leading tractor and farming equipment manufacturer. Mid- July marked the visit of senior officials from the US based conglomerate to its collaborator’s office in Chennai. TAFE the host company decided to bring about a touch of warmth to the high power meet of the two companies by organizing a visit of the dignitaries to the Sri A.Sivasailam block, Sankara Nethralaya’s State of the art eye care facility, a proud creation of its Corporate Social Responsibility Initiative (CSR), as part of the visitor’s agenda. A simple function showcasing and celebrating the TAFE- Sankara Nethralaya collaboration was organized at the Srimathi Jayashree Venkatraman Auditorium at the Sri A.Sivasailam block, named after its founder. The function was graced by Ms Mallika Srinivasan, CEO and Chairperson and senior management members from TAFE and distinguished dignitaries from the Allis-Gleanor Corporation (AGCO). Sankara Nethralaya the beneficiary of TAFE’s massive CSR initiative was represented by Dr. T.S. Surendran, Director Pediatric Ophthalmology department and Vice-Chairman and Dr. Prema Padmanabhan, Senior Consultant and Director, Cataract &IOL department.

The latter took the opportunity to express her institution’s deep gratitude for the great support and encouragement extended by the nation’s premier farm equipment company, she gave an absorbing presentation on the large scale community services rendered by Sankara Nethralaya, its high level ophthalmic research, carried out for the common good, academic endavours to prepare a large army of dedicated professionals to fight the battle against blindness. Dr. Prema Padmanabhan recalled the long association between two of the city’s well known institutions, dating back to the days of Shri A.Sivasailam, Founder TAFE and a great friend of the institution, who had supported it during its days of inception to TAFE’s present day support by way of its massive ‘Corporate Social Responsibility’(CSR) endeavour under the dynamic leadership of its CEO and Chairperson Ms. Mallika Srinivasan, which blossomed as the Sri A.Sivasailam block, the State of the Art eye care facility named in memory and honour of her father. The presentation was extremely well received by the distinguished audience, her note on Sankara Nethralaya’s ‘One of its kind in Asia’ ‘Operation theatre on wheels’, the institution’s revolutionary initiative of performing vision revival surgeries for ‘Cataract’ the single largest cause for blindness in the country, right at the door steps of poor patients living in the most inaccessible and remote regions of the country, drew special attention and praise.

In an interesting turn of events the function organized to highlight TAFE’s role in alleviating the suffering of the visually impaired to the visiting team assumed the role of a fundraiser for its beneficiary. In a gesture reflecting its high appreciation to the noble initiative of Ms Mallika Srinivasan who serves as a director in their board and a ‘joining hands’ effort, the Allis-Gleanor Corporation (AGCO) made a generous, on the spot grant towards Sankara Nethralaya’s cost free community services to the thunderous applause of the gathering. While the donation from the renowned technology leader in the field of farming equipment came as a great support in the institution’s ongoing battle against blindness, especially among the weaker sections of society, the citation ‘We commend your commitment to improve the lives of those most in need’ signed on behalf of the global leader in its field, by Mr. Martin H. Richenhagen, Chairman, President and CEO, came as a proud compliment and feather in the cap to the non-profit’s tireless work among the poor and needy visually impaired, living in the most remote/inaccessible regions of the country.